The 28 July I took part in the Davos Swiss Alpine Marathon. This is 78.5kms but there are also several other races including two marathons and a half marathon.
The race was extremely well organised from start to finish, with spectators and volunteers doing a great job. We were lucky to have sunny weather, at least for the main part of our race. A storm came in during the early afternoon and got me at the high point of the race, but the organisers were out in force with dustbin bags for those who had no rain gear.
This is one of the best races I have done because the terrain is rolling for much of the way so you can expect to run a large part of the race, and also because the trails are wide and so there are very few traffic jams. When you finally hit single track on the steep climb to the Kesch Hut you are 50kms into the race so the crowds have spread out.
Definitely a highlight of my summer and a welcome treat even though it had to be slotted in between treks - this is after all high season. Highly recommended to those of you looking for a good long run in the mountains.
Posted by Trekkinginthealps.com at 04:19 No comments:

Successful new treks and plans for 2008! 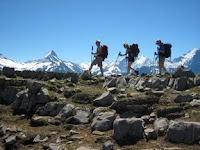 Trekking in the Alps has organised several new treks these last weeks which have been a great success. The Tour of the Jungfrau Region was a 6 day trek which enjoyed superb hot and sunny weather mid July. This trek takes an intriguing route around the Oberland region, with superb views of the Giants of this massif - the Eiger, Mönsch and Jungfrau among others. The trek is not easy - lots of steep ascents and descents - but the scenery is more than rewarding. After a couple of days in the well-known Kleine Scheidegg area the route heads off to the wider Lauterbrunnen valley and explores the far side of this, including a fine day traversing the Schilthorn summit and also taking us into some fabulous remote and unspoilt valleys. A real classic that we will be repeating next year. 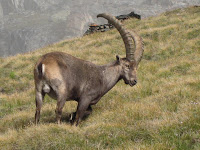 Another big success was the Gran Paradiso Alta Via plus summit week. The Gran Paradiso 4061m is Italy's highest summit and we managed to climb this (just) as a storm enveloped us last week. The rest of the week was fine and sunny and so we were able to do the whole trek as planned including 5 passes of 3000+m. An international group proved to be great fun socially and this was definitely a highlight of the summer for us. Again this will f 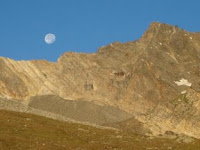 Finally due to popular demand the Tour of Mont Ruan is already confirmed for 2008. This is a little-known trek in the remote limestone massif on the edge of Mont Blanc. We did this trek in 2003 and the group are still talking about it. I have just had an article published about it in the August issue of TGO magazine. If you're interested in hiking away from the crowds on a demanding trek including several trekking summits - this one is for you.
We are in the midst of several wet and cold days - hopefully the sun will soon be back for the final treks of this season.


Posted by Trekkinginthealps.com at 03:58 No comments: