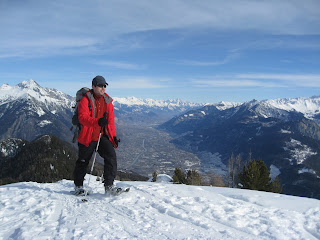 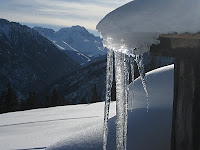 Well I've had a great week with a great group! The snow conditions have been really good for snowshoeing, and probably for skiing too although you had to be lucky to avoid the wind blown areas. Some days were pretty foggy but this doesn't really bother us on snowshoes as we can go in the forest and still have a good hike.

When people come to the Alps for their first time on snowshoes it's a huge voyage of discovery, from the techniques of actually walking in the snow, to learning about avalanche risk and safe travel, to the glorious reality that as well as a way to get into the mountains in winter, snowshoeing is just FUN!! 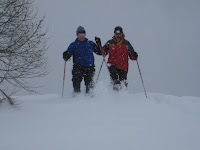 As my group this week became more confident in the snow and with each other the fun levels rose each day, encouraged by a couple of confirmed snowshoers who already knew the deal.
By the end of Thursday there were requests for lots of downhill for the last day which would not have been the case a few days earlier.

And the last day obliged with slopes of fabulous untracked powder, just waiting for us and our raquettes. 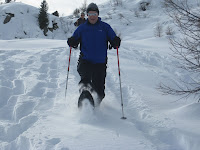 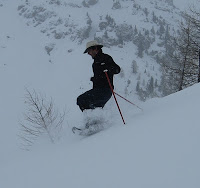 One person told me "Hilary, I haven't had as much fun as I've had this week for a very long time". 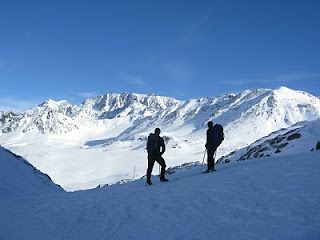 Posted by Trekkinginthealps.com at 11:37 2 comments:

A magical winter wonderland - at last! 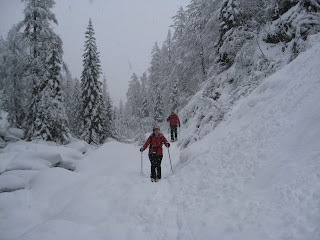 Well it's been a week of very odd weather here. We've gone from freezing cold with high winds, to heavy snow last Monday creating havoc on the roads in the space of a couple of hours to pouring rain as high as 2000m the next day! The main road in Vallorcine became a river and avalanches roared down the valley slopes, closing the road to Vallorcine for several days this week.
But we could still snowshoe, albeit a bit damply. Once again we found that snowshoeing was one activity that could be done regardless of the weather and whilst it was a bit depressing to set off in the rain, this soon because snow at altitude and the snow under-raquette remained surprisingly good. Some views would have been nice....but the snowy forest was pretty.

Nevertheless the numer of times I have snowshoed in the rain during the last 19 years here could be counted on one hand - and two of those times was this week!

Then yesterday it all came good - big snowflakes were falling all day and soon we had a good half metre of fresh. Everything was white and beautiful, a magical winter wonderland. What a great way to start 2010! 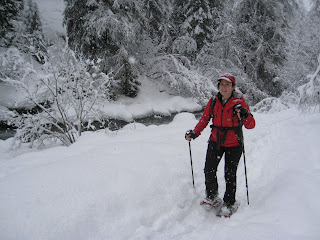 Posted by Trekkinginthealps.com at 08:10 No comments: