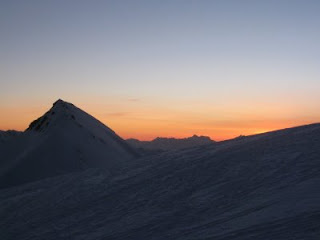 It's been hot and sunny for almost two weeks and we were getting very used to it. The snow has gone in the main valleys and the flowers are pushing up, and the new leaves beginning to appear.
But winter is not over yet it seems. High winds the last few days were definitely signs that change is a-coming and tonight it's started to rain - luckily it's forecast to get colder and snow - rain is not great for snowshoeing and skiing!
Even though it hasn't snowed for the last 12 days there is still fresh and untracked powder to be found. 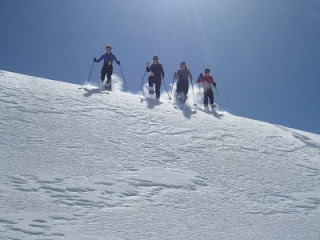 Conditions have been excellent and there seem to be fewer people around - certainly we have found ourselves alone for much of the time on our snowshoe hikes. So now we're supposed to have another top-up of fresh - but the meteo people don't seem sure how much, so we'll see. Heavy snowfall on top of the hard snow on some slopes would provide potentially very dangerous avalanche conditions.....

But hopefully the sun will soon come out again and we can get back to tracking that powder and enjoying those blue sky days. 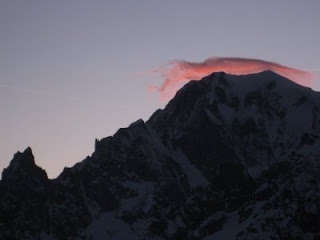 Posted by Trekkinginthealps.com at 14:01 No comments:

It's been an interesting week in the Alps. Heavy snow-fall early last week took many of us by surprise but gave some amazing, if very cold, conditions.

Once the snow stopped though it warmed up very fast - that's the difference between March and January. Now the days are long, the sun is high in the sky and settled weather usually means those wonderful sunbathing lunches at the top of the mountain after an early morning ascent.

Of course, winter is far from over and the last few years have seen lots of fresh snow in April - we'll see this year, it feels like we've already had more than our share of the white stuff.

The high winds and sudden change in temperature mid-week left a snow-pack that was far from stable as several serious avalanches proved. It is worrying to watch the super-quick tracking by skiers and snowboarders of the slopes opposite our house, which are renowned for being prone to avalanches. Wednesday afternoon saw several wind slab slides caused by skiers and the rescue helicopter was out until dusk searching for victims.
So about 4 weeks left until Easter. I will be out snowshoeing with groups, for much of the time.