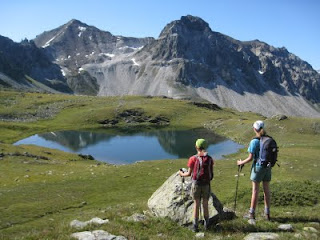 It's been a month of non-stop trekking, so lots to report. After a great Tour of Mont Blanc at the end of June and my first Mont Blanc Summits week early July, reported in my last post, we have since had the Tour of the Matterhorn and Tour of Monte Rosa treks, both of which took us into remote areas of the Italian Alps where we found unusually snowy slopes for this time of year. Late snow in this region has not melted on many shady slopes. 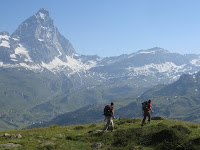 This actually made some ascents easier, as normally tortuous scree slopes were covered with a smooth layer of snow. Other slopes, however, required caution and I was glad to have my usual small groups of people - this means I can easily look after everyone and ensure security. Bigger groups that we met were having problems and some even had to abandon the treks.
Whilst weather conditions were far from stable during these two weeks, and I frequently put my waterproof sac cover over my backpack as a dry weather insurance method, we did not once 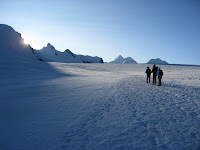 walk in rain. The Tour of Monte Rosa group were lucky to have good condtions for their ascent of the Breithorn summit above Zermatt.
These treks were followed by a wonderful trek from Zinal to Zermatt with a family group of parents, two young girls, a sheep and a cat (not all actually living creatures you understand!). All performed brilliantly and "kicked ass" on several occasions!
We finished with a hike up to the base of the Matterhorn for some and an ascent of the Allalinhorn for others. 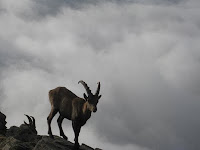 The flowers have been fantastic this summer, and we've also had some great wildlife spotting, althought the marmots seem to be a bit scarce - maybe the long winter proved too hard in some places. 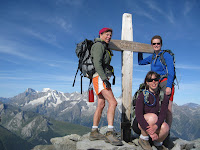 Finally this last week saw my second Mont Blanc Summits week for this summer. These weeks feature 3 two day expeditions, one in France, one Switzerland and one in Italy. After a cloudy first two days, we had perfect condtions and did 3 non-glaciated trekking summits in the last 3 days, all with full 360° views of the neighbouring glaciated summits - Monte Blanc, the Matterhorn, Monte rosa, the Gran Paradiso.... These weeks are really fun beacuse we are not on a specific trek and so we tend to go to p 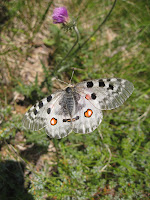 laces where there are no other people. We did meet a large number of Italians on Monte Zerbion as it has a huge Madonna on top, but they had all come up by an easier route so most of our day we were alone. We also enjoy very varied accommodation - refuge nights are interpersed with nights in luxurious accommodation - notably a vineyard in Italy.
So now some days off will allow me to plan the programme for 2010 - firstly the winter snowshoeing and then the summer treks.
The link for the 2010 snowshoeing programme will be on my blog in just a few days.

Posted by Trekkinginthealps.com at 03:12 No comments: