Revving up for the Provence Hiking Week! 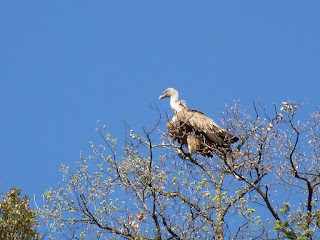 Provence is at its best at this time of year as all the plants spring into life. Right now the weather is quite showery but every day there are hot sunny spelalls that sometimes last the full day, sometimes interspersed with rain showers. This is really great for the trees and flowers and also probably for the animals and birds too.
The vultures have been very active and yesterday I saw my first Eyptian vulture - rather a blurry shot but easy to recognise by its colouring. 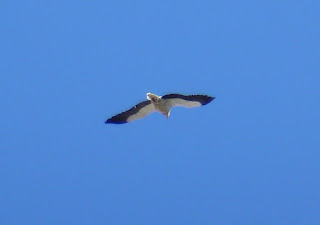 I've been out and about checking walks for this coming week when I have a group here for the Inaugural Northern Provence Hiking Week. I have previously led lots of hikes further south near to the Côte d'Azur and in the hinterland of Nice, but this is the first time Trekking in the Alps has a week here in the Drôme. The scenery is wild and spectacular, the wine is wonderful and the food good and traditional. Let's hope the weather holds up and the vultures perform.

Watch this space for news in a week!
Posted by Trekkinginthealps.com at 01:33 No comments:

A FAB season draws to a close 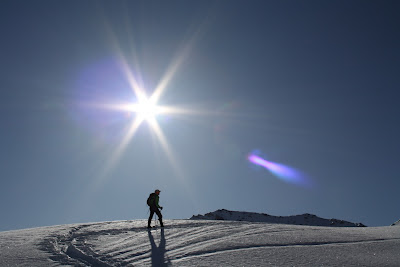 WOW!!! There is no other word for it (well, maybe AWESOME, but I'm British and we usually don't say that). This winter season in the Alps has been amazing. We've had so many sunny days, it's incredible there was any snow under raquette. But there certainly was and this is because firstly it snowed an AWFUL LOT in December and then it was VERY COLD for most of January and February. Result? Brilliant conditions and relatively little danger. 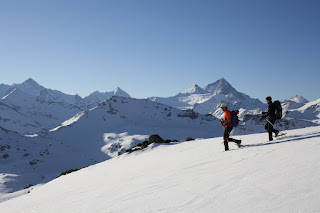 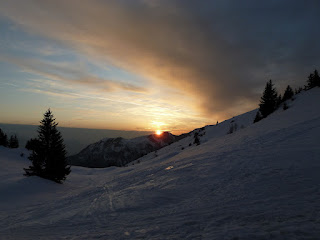 I've just finished two fantastic weeks, one in the Giffre Valley in th French Haute Savoie where we found excellent conditions somewhat against the odds given the relatively low altitude and very hot temps, the other in the Swiss Val d'Anniviers where we spent two nights in a hut at 3000m so were pretty sure of snowy slopes, but nevertheless the warm and windless conditions gave us 6 superb days of snowshoeing. I also continue to have the Very Best Clients (who quickly become my friends) in the world - thanks guys for being so much fun. 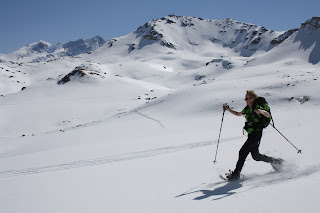 After hard climbs up we were lucky enough to find good snow for some wild descents, for those that like that sort of thing: 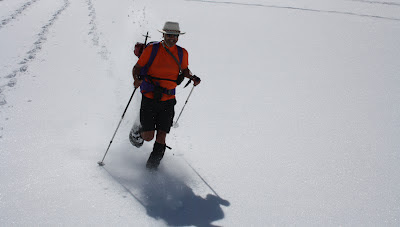 ﻿
﻿
Incredibly, given the good snow, the mountains were deserted. Where is everyone? It is always the case that on snowshoes you can find solitude in the hills but lately it's been really difficult to find anyone to say "Bonjour" to! 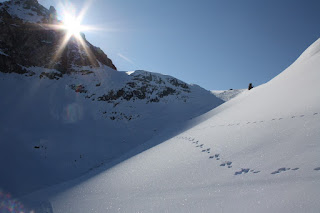 Over the last 21 years I have fallen in love with snowshoeing. But this last season has increased that passion and convinced me that snowshoeing is The Business, The Future. Come and see if you don't believe me. In fact come and see whether you do or not!
Meanwhile let these shots tell the story. And I just hope winter 2013 will be as good as this one. 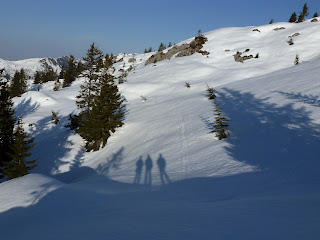 Posted by Trekkinginthealps.com at 12:58 No comments: