The Magic of Snowshoeing!

We're already into the 3rd month of 2017 and this is my first blog post of the year. Time flies when you're having fun...in this case snowshoeing.
Okay, so this is my job but much of the time it's a pretty good one. Let's take my office, for example. This is what it looks like most winter days. 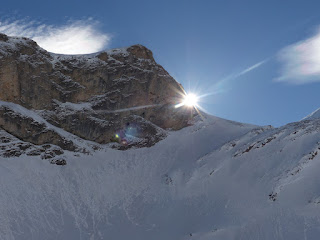 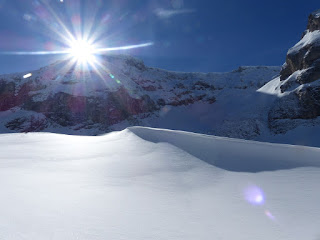 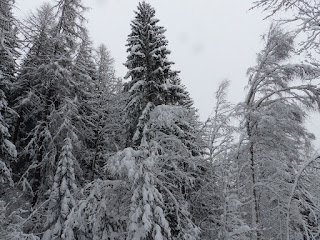 Then there are the other people in my office who are generally pleasant, fun and kind. Of course, that's not a given, but usually anyone who chooses to share my office is there because they like the decor and the activities.
Clearly some folks are livelier than others...some like to take it gently, quietly, enjoying the surroundings; others are buzzing with pent up energy and tend to frolic and roll around.
Hopefully they will have taken some care with their wardrobe and worn nice bright colours which go so well with the winter wonderland that forms my world for 4 months of the year. 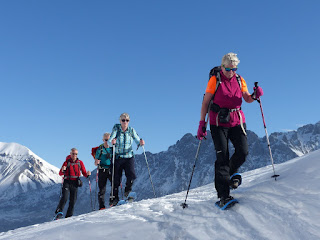 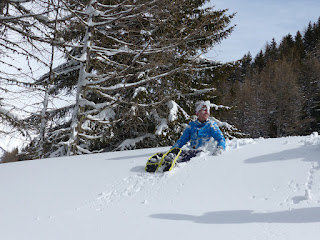 In 2009, when I had already been doing this job for nearly 20 years, I first met Bel, who came on a  snowshoe trip in the Alps with me. She was smitten with snowshoeing, loving everything about it. Clearly I also was, that week remains in my memory as a very special one. Bel has returned many times since and has become a dear friend.
The next time she came, maybe I was looking frazzled one day, I don't know, but she asked me if the Magic of Snowshoeing was still there. I could honestly answer that yes it was...most of the time!
Since then I often think about that, and this winter, whilst sitting at a typical spectacular viewpoint having a picnic, I asked my group (including Bel) what they thought defined the magic of snowshoeing. 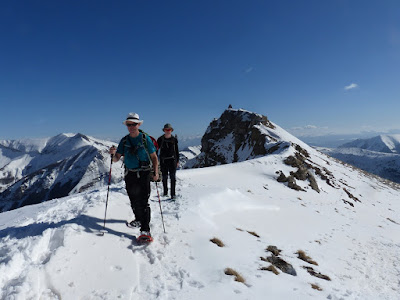 There were lots of replies......the solitude, the scenery, the fabulous places snowshoes can take you to, the satisfaction of reaching the top, the exhilaration of the descent, the low impact environmental aspect.....
But Bel put it into words better than I can so here's what she wrote:
The magic of snowshoeing is that it transports you to a different time and space. Climbing high above the valleys, you leave behind the mundane day to day worries and enter a world of art and drama.  The pace of snow shoeing enables you to look around and be in the moment - absorbing the long blue shadows on gleaming white slopes, the ever expanding views over jagged peaks stretching for miles, the twists and turns of rock formations on dramatic cliffs towering over hidden combes.  Art is formed by wind sculpted shapes, by the crisscrossing animal prints, by the long shadows and the sun filtering through the trees.

Depending on the day the light can play tricks, flattening slopes, merging snow and sky, creating an unfamiliar other world.  On another day sound is deadened as thick flakes drift slowly down over already snow laden trees and catch on eyelashes and turn rucksacks white.  Other times the snow glitters in the sunshine while the impossibly deep blue skies overhead beckon you further onwards.  Snowshoeing expands the soul. 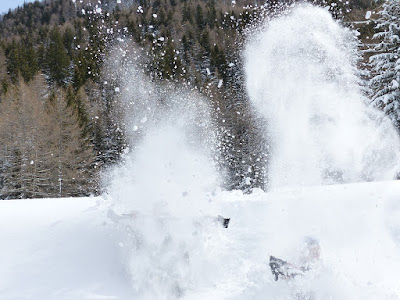 Snowshoeing is exhilarating.   From catching your breath on a cold frosty start, feeling the cool air expand the lungs, snow shoes gripping on crusty snow, ever upwards, secure in footing, to the first stop of the day.  Then testing the snowshoes on different snow types, sometimes soft, sometimes icy, but always gripping.  Walking to places that would otherwise be difficult if not impossible to reach.  Heading down hill – the exhilaration of running, leaping and releasing our inner child, having fun and playing in the snow.  Other times more serious where concentration is required to safely and securely stomp down exposed descents – the exhilaration of trusting both the shoes and the guide.

The other world of snowshoeing includes a wonderful interaction with nature – watching golden eagles soar overhead, gasping at the agility of chamois on impossibly steep cliffs, hearing woodpeckers call and the cheerful chatter of small birds rejoicing in the sun warmed vegetation.  Seeing primroses emerge as the days lengthen in spring.

So that's it, now you know. The next step is to come and experience it first hand with me....

Posted by Trekkinginthealps.com at 13:10 4 comments: